Greater Philadelphia Area
in honor of mia and maci bentin 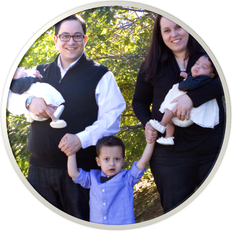 ​Christine Tyson started the Greater Philadelphia Area division in 2011 after her boy/girl twins were born at 26 weeks gestation. They spent three months in the Pennsylvania Hospital Intensive Care Nursery (ICN) before her son was transferred to The Children's Hospital of Philadelphia Neonatal Intensive Care Unit (NICU) for surgery. Christine and her family have since moved out of state; however, she still remains a Project Sweet Peas volunteer.

As of April 2013, Maria Bentin has assumed responsibility for the Precious Kisses division. Maria and her husband have three children, including twin girls who were born in June 2012 at 25 weeks gestation and spent nearly 4 months in the Bryn Mawr Hospital NICU.

In 2015 we were happy to welcome LeighAnn Gawel as a Project Volunteer for the division. After delivering her son at 30 weeks and experiencing the ups and downs of a 52 day NICU stay, LeighAnn grew passionate about wanting to help provide hope and encouragement to those in a similar situation.