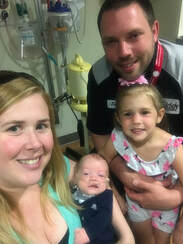 On February 19th at 2:30p, my water broke at home. I was 26 weeks along and so scared. I went to Carolina's Medical Center - University where I was then transferred to Carolina’s Medical Center - Main in case the baby decided to show up that night. After being pumped with magniseum and many other antibiotics, they were able to stop labor and put me on bed rest in the APU in hopes to keep me pregnant until April 14th.  I was doing good until early Friday morning when contractions started again. I was checked and was 2cm dialated and developed chorio (an infection of the uterus due to the lack of amniotic fluid).

I was rushed to the OR for an emergency c-section and had our son, Landon Lawrence, at 9:32a on Friday, February 24th. Landon weighed 2lbs 8oz and was about 12" long. I was exactly 27 weeks.

​Landon was taken down to the Levine Children's Hospital NICN where he was put on bubble CPAP. He remained on bubble CPAP until he was 33 gestational weeks. Landon was transferred to NPCN on the nasal cannula on Sunday April 23rd in the early hours of the morning. He stayed there until June 9th, 2017. He overcame a lot of obstacles. Having issues eating, apnea episodes, getting tired and/or choking while eating, or having bradycardia (low heart rate; lowest I ever saw was 34bpm) episodes. Landon came home on oxygen and monitors on June 9th. He thrived when he got home, so much so that one night he decided that he had enough of the nasal cannula and decided to rip it off and took the tape off his face (along with some skin) as well.  He was taken off of all oxygen on July 5th, 2017.  Landon was diagnosed Bronchiopulminary Displasia (BPD), and because of that we have been extra careful with him when it comes to hanging out with kids.
​
Today, Landon is 2.5 years old weighing in at 34lbs and is 37.5" tall (as of September 9, 2019). He has started preschool and has completely caught up developmentally. Little Man loves playing outside, reading, cars, and doing anything with his Big Sister, Emma! You would have never guessed he was 13 weeks early and fighting for his life.
Copyright © 2021 | Project Sweet Peas | 45 Boylston St, Warwick, RI 02889 | info@projectsweetpeas.com