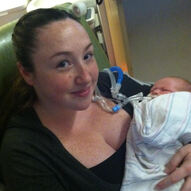 After a seemingly healthy pregnancy, at 41 weeks, in the wee hours of May 29, our sweet Maggie Rose entered this world via emergency C-Section at Mount Auburn Hospital. Although we had a pretty “normal” pregnancy, there were a few warning signs of stress in labor and delivery so they had a team of doctors waiting to tend to her as a precaution.  Because of the immediate need to deliver, I was put under anesthesia for the c-section and my husband had to make decisions that would impact us all.  When I awoke, it was a very confusing time.  My mind was still groggy, and my body was tired from a full day of labor.  I had been told that Maggie was being transferred to Mass General Hospital via ambulance because of the severity of her condition.  I was able to see her for a brief moment in the incubator as they wheeled her by my room.  Being an advocate for me, my husband insisted they find a way to transfer me as well and thankfully enough, there was a bed available so a few hours later I was also transferred via ambulance.

There really are no words for the day your baby is born and you are not able to hold them.  It was like I was so close yet so far away from her with 14 floors between the NICU and the floor I was put on for my recovery.  To be able to see her I had to ask permission to leave my floor and then again to gain admittance to her room.  Permission to see my own baby? What a strange concept to me at the time.

Meconium Aspiration Syndrome is something I was not even aware of prior to my delivery.  In most cases, the recovery is quick but Maggie's lungs were severely damaged.   She was on breathing machines, and could only handle liquid nutrition through her feeding tube. She was sedated and unable to move for the first 14 days of her life.  We were not able to touch her, we sat in darkness, and we had to keep all sounds to a minimum because her body was under a lot of stress. This made the first few weeks extremely hard and lonely for us.  It was even harder on her big sister Skyla, who at age four was very confused and agitated at the whole situation.

After the first 14 days, I FINALLY GOT TO HOLD HER! I had to agree to sit still for an entire hour because her body would need time to recover just from moving her.  BEST HOUR OF MY LIFE!  I soaked up every minute I had.  A few days later, my husband got to make the same deal.  And then a few days later we were allowed to touch and to care for her a few times a day. She started getting small doses of my milk I had been pumping, and slowly but surely, she was decreased off of her breathing machines and began to ween off of the drugs keeping her sedated.  Although things were getting better, it can still be a lonely and sometimes bitter experience tending to your baby in the NICU setting.  On top of that, my husband had to return to work so I spent most of my days alone by her crib for the remainder of her 45 day stay.

Our family has grown since then, with little brother Liam completing our family in December of 2015.  And it was actually his positive birth experience that helped fuel my fire for joining Project Sweet Peas in 2016.  Since then, I have been very blessed to be able to help give parents any amount of hope or to remind them that I understand what they are going through.  And even though I may not know them personally, I am thinking of them during some of the hardest moments of their lives.
Copyright © 2021 | Project Sweet Peas | 45 Boylston St, Warwick, RI 02889 | info@projectsweetpeas.com